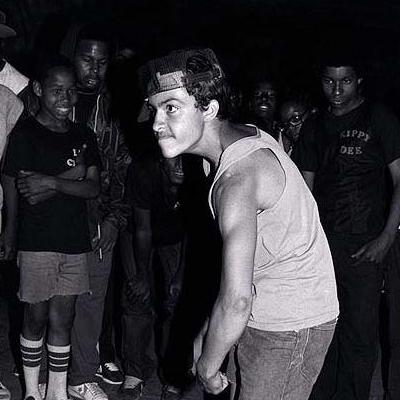 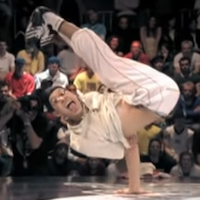 By 2005, sets could be seen punctuated with a "Bruce Lee grin or a mocking Maori tongue" .

The scowl is particularly common in breaking, and hip hop in general (e.g. famous photographs of Kase 2 and Biggie). An early description of Afrika Bambaataa reads, "in his many snapshots from the period, Bambaataa looks young, lean, and angry, his eyebrows fused in a permanent scowl of disapproval—just the sort of look designed to intimidate whitey" . The scowl may have been a result of the environment in which breaking was created, as according to Puff Daddy, "in street life you're not allowed to show if you care about something, you've got to keep that straight face" . Schloss similarly theorizes that, "this basic survival mechanism has become abstracted as part of the b-boy dance," reflecting the ideal "that one should be intense yet totally in control [...] They should not only be prepared to battle at any time, but they should look it" . Aesthetically, Vernon observes that "it is of prime importance to appear untroubled either by the difficulty of one's moves, the prowess of one's opponent in battle, or the unique pressures of the ritual environment" .

A well-known facial expression is Ken Swift's "mad mugsy," characterized by a puffed-out lower lip. Fabel relays that Ken Swift got the mugsy from Bruce Lee , while the name was inspired by the eponymous Looney Tunes character. As an aside, "the first mugsy Character that Doze ever made was drawn from Ken Swift's Mugsy B-boy pose" .

There are differing opinions on making eye contact with an opponent. Ken Swift recalls that there was not a lot of eye contact in 1978, as it was considered disrespectful, but notes that

"I think it's competitive and it's strategic, but when you look at dancing, it's about the music really... Personality, character. But some people like to look at people on the face and give them eye contact. Some people don't have to. Some people are just really good and it's intimidating to not look at somebody because some opponents that are used to being stared at, they start wondering, "why is he not looking at me and just ripping me apart on the floor with no concern?" Everything is strategic so I think it's fine that b-boys and b-girls do that. It's a good thing to do because you can watch your opponent, you can see their emotions, so it's a very important tool."1