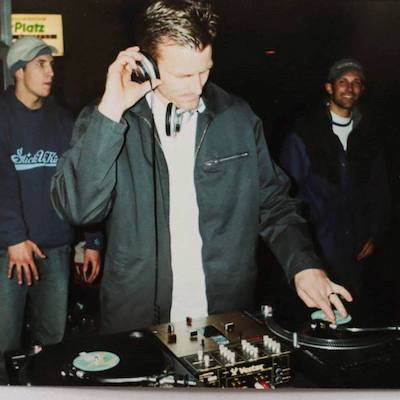 Music, songs and sounds that breakers break to.

The original breakers chose particular songs, or parts of songs, to break to—often a short percussive section of a record called the break. DJ Kool Herc recalls that some people at his parties would wait for the break to dance , which in turn led to his idea of playing breaks back to back. This technique was later refined by Grandmaster Flash. While many of Herc's breaks came from "black soul and white rock records with an uptempo, often Afro-Latinized backbeat" , the sources of hip hop's breaks became increasingly diverse, especially with the contributions of Afrika Bambaataa.

DJs proceeded to augment the extended breaks with turntablism, MCing, and beatboxing, creating music later classified as hip hop. Unlike extending the break, these other innovations were not done for the dancers, necessarily. Indeed, hip hop music evolved away from breaking in the late 1970s, reflecting the dance's waning popularity. 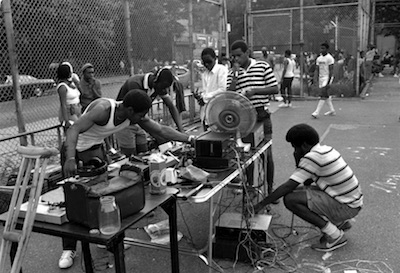 Breaks, or breakbeats, beats, percussive, often instrumental, danceable songs or parts of a song. Hager describes the break as "the hottest segment of the song, which was often just a 30-second 'break' section—when the drums, bass, and rhythm guitar stripped the beat to it's barest essence" . Pete DJ Jones offers a more functional, and perhaps more accurate definition, "the best part of the record is the breakdown....what guys started calling the break or breakbeat. That was the part that got people dancing" . Kool Herc estimates that the term "breakbeats" gained currency in the 1980s .

Banes writes, "For the current generation of B Boys, it doesn't really matter that the Breakdown is an old name in Afro-American dance for both rapid, complex footwork and a competetive format. Or that a break in jazz means a soloist's improvised bridge between melodies" . 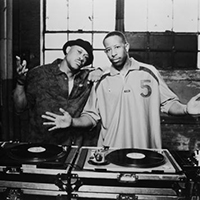 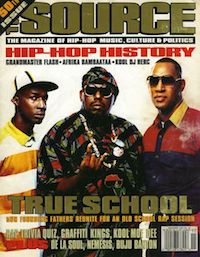 (Left to right) Grandmaster Flash, Afrika Bambaataa, and Kool Herc on the cover of Source, 1993 .

Herc, Flash, and Bambaataa discuss hip hop in an interview,

THE SOURCE: What do you think now when people say that there's a certain style of music that's considered hip-hop, and a certain style that's not considered hip-hop? Claims that some records are fake hip-hop records and some are real?
BAM: They're ignorant. They don't know the true forms of hip-hop. Just like I tell 'em, you got all styles of hip-hop, you gotta take hip-hop for what it is. You got your hard beats, you got your gangsta rap, you got your electro-funk sound which came from the party rock sound, you got your Miami bass, you got the go-go from DC. We was playin' go-go years ago. If you really with Teddy Riley, he came to Bronx River parties and heard go-go music and just flipped it up and now you got new jack swing. All of this was all part of hip-hop.
FLASH: It's all about different tastes. It could be hard drums like a Billy Squire record. It could be the bass hitting and drums soft like "Seven Minutes of Funk." It could have the hallway echo effect of "Apache."
HERC: We can't let the media define this for us. Someone says it's got hardcore beats and talkin' about bitches sucking dick, that's hardcore. That same person says that Jazzy Jeff & the Fresh Prince are soft, it's not hip-hop. It is hip-hop. It's just another form. It's about experimenting and being open.
BAM: Different generations have lost the true meaning. We were teaching the public when we did parties in the park.

Doug E Fresh claims, "I'm the inventor. I am the originator" . Fresh developed beatboxing gradually, imitating songs (including hip hop tracks) he heard from the record store he passed on his way to and from school. He would later beatbox during performances while DJ Barry B changed records, and began to feature it more prominently at Barry's urging . Other influential beatboxers from the 1980s include Darren "Buffy" Robinson and Biz Markie .

The etymology of beatboxing extends into the 1970s, where the term "beatbox" initially referred to a drum machine. According to Flash, "the beatbox is a manually operated drumbox that I used to play while I was Djing. It was a machine made in England by Vox. It had a bass drum key, snare, hi hats and hand claps. I used to play this like a typewriter almost. The phrase beat box was coined by me, but it didn't reach the masses. Well it went to sleep and reemerged with people doing it with their mouths. So the human beatbox is these guys emulating something that I created [...] My neighbor was a drummer who used it to keep his fingers nimble. Whenever he couldn't set up his drums he used this. He lived in the projects ­149th & Jackson Ave. I begged him to sell it to me, he sold it to me for $125.00" . Hager's 1982 artile in the Village Voice also mentions Flash's "electronic percussion machine called 'the beat box'" . Flash explains his motivation, "the beat box was an attempt to come up with something other than the techniques I created on the turntables to please the crowd" . Curiously, a drum machine named the "ELI CompuRhythm CR-7030 Beat Box" was released in 1979.