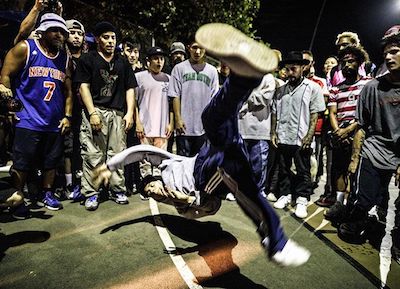 P-Nut in the cypher .

Cypher, or circle, circle of people "in the center of which b-boys and b-girls take turns dancing" . Music is sometimes considered a necessary component of the cypher .

The cypher has existed since the earliest years of breaking. Roger K recalls,

"you would hear [Apache] and you'd hear the beat and then the drums came in and you would see the B-Boy just go off!!! Crowds would form around them...circles....I mean way before MCs...circles and they would go off!"

Circles would form around battles . The practice of competitive dance in a circle of onlookers has a long history accompanying the African diaspora .

The word "cypher" (or "cipher") is derived from the Five-Percent Nation, where it referred especially to "the circles of people in which their lessons are propagated" . Cypher has an older meaning of "0." Schloss notes that "it is often referred to as 'the' cypher, rather than 'a' cypher, which suggests that all cyphers are, in some abstract way, connected. B-boys and b-girls view the cypher with an almost mystical reverence, befitting its status as the most authentic, challenging, and raw environment for b-boying" .