Hook, or wrap, move where a leg or arm wraps around another part of the body.

Hooks were well-established in breaking by the early 1980s. Arm hooks, while a component of the spider, may have been introduced into footwork only in the mid-1980s with Mr. Wiggles' "spiderman footwork" . Hooks and sweeps were further developed in Europe in the 1980s and 1990s (e.g. by members of Aktuel Force, Battle Squad, and Throwdown Rockers) . According to Storm, Battle Squad would combine hooks, where the body becomes small, with bigger steps in a style called "hook & sling" (Haken und Ösen) . 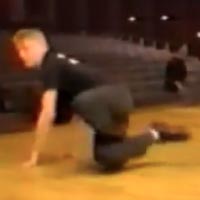 Also hook. Hook with one leg around the ankle of the other.

Also inside hook, hook under. Hook with one foot around the back of the opposite leg's knee.

Also leg behind head. Hook with the leg around the back of the neck.

Hook with one leg over of the other leg's knee.

Also leg wrap. Wrap with one arm around a leg.