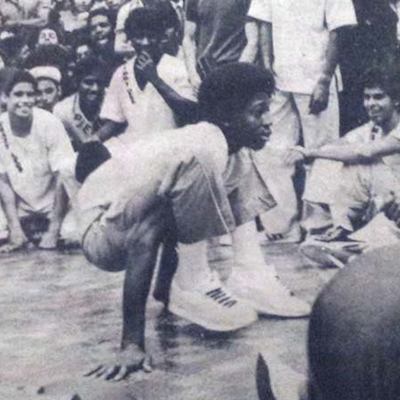 Press, freeze, position supported by only the arms, with the body lower to the ground than in a handstand.

Many presses predate breaking. The spider may have been the earliest press done in breaking; it was done in the Rock Steady Crew vs. Dynamic Rockers battle in 1981 , and may have been done by the Smoke-a-Trons .

Sequences of moves involving press variations were developed significantly in the mid-to-late 1990s. This class of moves has been given numerous names, including press style, hand transfer style, transfer style, footless footwork, Las Vegas style, and animal style. Kujo describes the style, "when they're on the hands the whole time—they have their feet up here against their wrist, and they're doing [...] a half flare, stop, pull through, all of that kind of thing" .

"We called it footless footwork because you're doing all these things with your feet, with your legs, but your feet never touch the floor. You're just on your hands the whole time. Just walking around, you know, doing half of a flare, pull through, shoot through, you know, things like that... go to your head, push up, you know, all that."

In the late 1990s, major innovations were led by Jin, Roland, Zoob, and others, particularly in Las Vegas. These included hand and arm stepping, different transitions between presses (or "transfers"), and increased emphasis on stacking. Common inspirations were Soul Control and Style Elements, with Ben Stacks additionally citing circus arts, and Jin mentioning flagpole sitting and Monkey staff practioners, as well as press-based moves by Benzo and a b-boy at Scribble Jam 1998 . Ben suggests that an event called Battle Club contributed to the development of the style in Las Vegas, recalling, "we were just going at it and transfers the whole time" . Ronnie adds,

"I think there were two main events in Vegas—Concrete Soul in 2000 and Illest in the Game in 2001—and that was when we pretty much came out with a different style. And it was Knucklehead Zoo, it was Full Force, and it was like RAOS. And we were doing threads, we were doing transfers, stepping on the hands."

Dyzee created several "low level freezes" in the late 1990s, and started to add elements of the "Vegas style" to his breaking after attending Illest in the Game .

I use "press" to mean a position supported by only the arms. 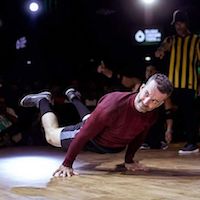 Planche with arms bent at the elbows.

Also straddle press. Press with legs in a side split, torso vertical, with arms in front of the body ("inside" the legs).

Outside press with legs held together horizontally (forming a right angle with the torso, or an "L" shape).

Also press. Press with legs in a side split, torso vertical, with arms behind the body ("outside" of the legs).

Also air turtle freeze. Planche with legs bent, outside of the arms.

Planche supported by only one arm.

Press with straight arms and body held horizontally, parallel to the floor.

L sit with legs to one side, as in a side walk.

Press with legs resting on the triceps.

Planche with legs tucked into the chest.

Also V Sit. Press with legs in front (as in an L sit), lifted in a "V" shape. A V kick rotated such that the legs are horizontal resembles the Manna in gymnastics.

Press variations where one or both feet are placed on the arms or hands.

Also air step arm, reverse airbaby. One-arm press with the foot placed on the supporting arm near the tricep, and torso facing upward. Developed by Dyzee in 1999 .

One-arm press with the opposite foot placed on the supporting arm.

One-arm press with both feet placed on the wrist of the supporting arm. Developed by Jin in the late 1990s . A variation on one's fist was developed by Roland.

Press with a foot stepping on the hand of a supporting arm.

Press with the foot placed on the supporting arm near the tricep, and torso facing downward. Developed by Zoob in 1999 .

One-arm press with the corresponding foot placed on the supporting arm, on the side of the arm closer to the body. A variation with the arm further behind the body called the step arm was developed by Dyzee in the late 1990s . Cf. air step.

One-arm press with the corresponding foot placed on the supporting arm, on the side of the arm further from the body.