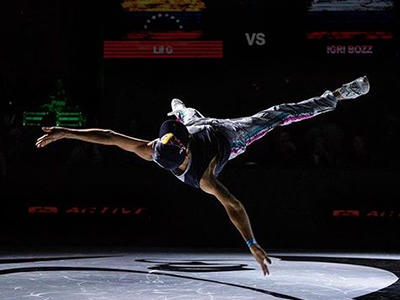 The definition of "power move" has evolved over time. In the 1970s, a power move was anything that made a go-down "spectacular" , while most modern power moves were called air moves . Evo describes power as "showman moves" , while for Focus, "if it spins and is dynamic, and maybe takes some strength (at least in the beginning), then it's a power move" . Popmaster Fabel calls power moves a "debatable term" .

Power moves are often one of five kinds:

Some flips, suicides, and freeze combos are sometimes considered power moves as well.

Power evolved as breakers attempted increasingly impressive, physically-demanding moves. Fab 5 Freddie recalls, "the younger kids keep developing [breaking], doing more wild things and more new stuff. We never used to spin or do acrobatics. The people who started it just laid down the foundations." . The first modern power moves (e.g. the backspin, headspin, swipe) evolved from footwork and freezes in the 1970s . Popmaster Fabel notes, "the pioneers didn't separate the "power moves" from the rest of the dance form. They were b-boys who simply accented their performance with incredible moves to the beat of the music" . Breakers with gymnastics backgrounds also introduced flips, the flare, and the 1990 . An early power transition was Willie Will's swipe into headspin .

The late 1970s and early 1980s saw the creation of windmills, floats, and halos. Combinations and variations with these moves also began to be developed, primarily by members of the Rock Steady Crew, the Dynamic Rockers, and the New York City Breakers. In the mid-1980s, longer, more intricate combos were developed, e.g. by Lil Alex , Lil Cesar , Orko , and the Sidewalk Breakers , as well as in the UK, as seen in the film Electro Rock . Advances in power became concentrated in Europe by the 1990s, with crews like Battle Squad, Second To None, and Enemy Squad, and later Suicidal Lifestyle and The Family . The airflare also became more common at this time, and would become heavily integrated into power combos in the late 1990s due to the efforts of Soul Control, Basel City Attack, and others. Crews like Style Elements and Circle of Fire also introduced new ideas into power. By 2000, significant developments in power were taking place in multiple countries.

The history of power is not confined to the development of moves and transitions. Speed, number of spins, and combo length continue to evolve. Originality, changes in speed and direction, interaction with the music, and integration with footwork and freezes are also hallmarks of modern power. Furthermore, while single power combos remain common, many breakers incorporate power moves throughout their round.

In modern, abbreviated descriptions of breaking, it is common to mention power moves. For instance, the New York Times writes in 2019, "break dancing — yes, the street dance form with moves like flares, headspins and windmills" , while the Wall Street Journal describes in 2020, "in competitive breakdancing, known as breaking, dancers perform one-minute routines in a 12-by-12-foot space. Judges rate dancers on creativity, technique, variety, musicality and personality. Breaking includes moves such as the headspin, in which a competitor balances on her head while rotating her torso, often with hands off the ground" . A 2019 BBC article proposes, "perhaps now [with the inclusion of breaking in the Paris 2024 Olympic Games], breakdancing will be seen as more than just 'the worm' in a nightclub; more than someone spinning on their head on a dancefloor" , suggesting that power moves constitute the most recognizable movements in breaking.

The following is an incomplete list of foundational power moves: