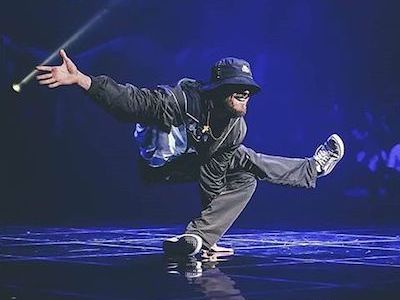 Freeze, position held without movement, often entered abruptly, in response to the music, and at the end of a round. Any position can be used as a freeze , although certain positions have come to be called freezes or freeze moves. The effect of a freeze depends not only on the move itself, but on its relation to the music, the transitions surrounding it, and the direction it points . A freeze can function "almost like an exclamation point, [...] a gesture, as if to say, 'Deal with it.' It's a challenge" .

Freezing on beat has been part of breaking since the early-to-mid 1970s . Some of the earliest freezes on the ground were developed by Clark Kent, including his backdrop (resembling the W) and a move where he would "drop back down into a fetal position and go to sleep" . Scorpio was known for a move where he would "turn his back and pause," inspiring his original name "Mr. Freeze" . There are claims that there were no freezes until the mid 1970s ; it is possible they are referring only to modern freezes (e.g. the baby, chair), or were unaware of the dancers who used freezes.

Starting in the mid-1970s, increasingly complex and abstract freezes were developed, including the baby and chair freezes. Originality continued to be a key component of freezes, leading to many dancers having at least one signature freeze. Banes writes in 1981, "it is largely in the freeze that each dancer's originality shines forth, in configurations that are as intricate, witty, obscene, or insulting as possible. A dancer will twist himself into a pretzel. Or he will quote the poses of a pinup girl. He might graphically hump the floor, or arch up grabbing his crotch" . Throughout the 1980s and early 1990s, it remained common for a round to contain only a single freeze, at the end .

Freeze combos, consecutive freezes, were done in the early 1980s. In Style Wars, Crazy Legs does a combination of baby freezes, turtle freezes, and bridges . In the mid-1980s, Skillroy developed combinations of freezes that became progressively higher, then lowered on the other side of the body called building a pyramid . In general, however, freeze combos remained uncommon until the 1990s .

Ken Swift started mixing freezes in with his other moves in the early 1990s. He recalls,

"Around 1993 while practicin' I decided to take my old moves and put attachments on to them, while focusing more on freezes. After that the flood gates opened up and I was makin' up a different move or combo every time I practiced."1

This style, used by Ken Swift, Zulu Gremlin, and others, would influence freeze frames . According to Roxrite, "freeze framing is rhythmic freezes [...] using freezes as a move instead of using them as an ending move" ; that is, freeze moves "become steps instead of actual freezes" . Another style of freeze combos called stacking was developed by members of Style Elements . Stacking evolved from moves like elbow freezes and handhops. New approaches to freeze combos were also developed by Orb and E.T., and later Hong 10 and Physicx .

The following is an incomplete list of foundational freezes: