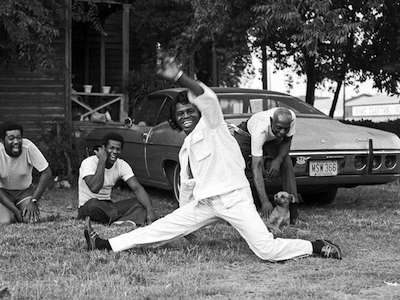 Influences, sources of inspiration outside of breaking that have helped shape aspects of the dance. While breaking is perhaps mostly a product of the music, the battle mentality, and individuals' imaginations, external influences have always existed. Ken Swift said,

"Breaking is just unique the way it's all put together. It's like the ultimate dance, because you can take from everywhere, but you just had to put b-boy flavor on whatever you took from."

This page offers brief descriptions of some of the more well-documented influences.

What influenced dancers during the early-to-mid 1970s are considered here. Naturally, the dancers' environment was a source of inspiration, which included dance seen outside or in clubs, gangs, and anything on TV or in movies. These influences contributed the early movements of breaking (e.g. toprock, drops, footwork) as well as its practice and overall approach.

Some professional dancers were familiar to early breakers. James Brown's dancing is cited as an influence by Kurtis Blow, Sasa, the Legendary Twins, Imperial JC, and Trac 2 , among others (his music likely affected all early breakers). While one can imagine the influence of Brown's intricate footwork, or funky style combining fluid movement with sharp accents (and even complete freezes) driven by his music, it is his drops (e.g. a knee drop, drop into a push-up, and split) that early breakers tend to cite in particular . The drops also reflected the great physicality of his dancing, and were usually only used during the "bridge" of the song—aspects of his dance echoed in breaking.

Brown's attitude expressed in his dance may also have been an influence, especially in contrast with other mainstream dancers. Alice Echols writes on this distinction, "there was no mistaking the tough-looking James Brown with his streetwise swagger for the Temptations, whose dance steps were taken from the street but who possessed the sort of supper-club sheen characteristic of crossover black entertainers" . Coupled to this was Brown's "lack of restraint, his embrace of "His Bad Self'" , which manifested in his energetic moves. 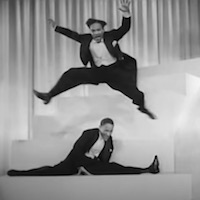 The Nicholas Brothers Harold (above) and Fayard (below) in Stormy Weather (1943) .

"I'd been doing the mashed potatoes for years but I'd never put a name to it. The dance had been around for years, kind of of in the public domain, but nobody ever did all the things with it that I did. My mashed potatoes is really a combination of a lot of dances: the applejack, the dolo, and the scallyhop. The scallyhop takes off from the Lindy hop, the dolo is kind of like a boxing routine, a slide, almost like the skate, and if you put it all together, you have the James Brown. Plus, I have a nerve control thing that I do that makes my whole body tremble, and that adds a little bit more to it than most people can do."

The Twins also mention the Nicholas Brothers as a major influence . Their style has been described as, "a melding of jazz, tap, acrobatics, and black vernacular dance," sometimes incorporating "daredevil splits, slides, and flips" . Like Brown, their moves, physicality, and performativity were early sources of inspiration. 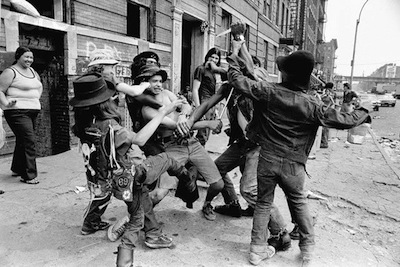 A publicity photo for Gary Weis' 80 Blocks from Tiffany's where, Steven Hager writes, "the Savage Nomads demonstrate an early take on up-rocking" .

Hip hop dance developed around 1985 or 1986 as breaking and popping became less popular, and in response to new music . Buddha Stretch recalls,

"When [the breakdance craze] died out, you know, we used to hang out and dance in the park and all that. And then we noticed that, when we would go to the clubs, less and less people were doing it and people were like, "ahh that's played out" so then it was like, what do you do? So what we did was, we just started dancing. We just took every dance that we knew, and just started, you know, bugging out."

Hip hop dance is an improvisational dance that incorporates elements of numerous other styles, including social dances, breaking, popping, locking, the hustle, Memphis Jookin, and many others, on top of each individuals' style. It is often danced to hip hop music, lending the dance its name . Some choreographed dances are occasionally called hip hop dance, as well.

Breakers drew inspiration from capoeira in the 1990s , with some claiming its influence began earlier . Jelon Vieira, the first teacher of capoeira in the USA, arrived in New York in 1975 , although whether or not any breakers saw him is uncertain. A significant collision of capoeira and breaking occurred in 1993 when Mestre João Grande shared a performance with the Rock Steady Crew . It is difficult to estimate the extent of capoeira's influence on modern breaking due to the substantial overlap in both movement and philosophy. Some examples of similar movements are corta capim and the sweep or helicopter, queda de rins and the baby, and aú batido and nike. Julie Delgado theorizes that, "though they came to be hundreds of years and thousands of miles apart, both cultures maintain the traditions of the African Diaspora: movement as a vehicle for mental transcendence, oral history, respect to musicians and transgression of oppressive circumstances" .

Capoeira has been described as "an Afro-Brazilian cultural practice – simultaneously a fight and a dance – that can be interpreted as a tradition, a sport and even an art form" , and a "dance-fight-game" . Its complex history spans several centuries, with early written accounts appearing in 1770 and 1809 . Regarding its origin, Nestor Capoeira writes, "the origin of capoeira, whether African of Brazilian, has stimulated many discussions up to the present day. Even the most important mestres, such as Bimba (1900–1974) and Pastinha (1889–1981), had different ideas on this subject" .

"Today, something called “capoeira contemporânea” (contemporary capoeira) is spoken of; that, actually, is not capoeira: it is a small part of capoeira, the people are leaping—even if they do it in gear (in time)—however, each one still leaps and flips alone, individually. It is a badly organized circus; a circus of badly managed acrobats. However, it can be done in an organized way, with coordination and movements that are in gear, doing all those movements that exist today, because capoeira evolved. Forty years ago I saw capoeiristas doing backflips in the capoeira roda, beautiful, but in gear, one inside the movement of the other. I also saw João Grande and João Pequeno playing on the ground, and it was not the Angola that today people say: “this here is Angola”; no, the Joãos did everything: bananeira, João Grande did ponte, queda de rins, even the chamada volta-por-cima. ... and today, no: the people stick with meia-lua de compasso here and there, passing the leg above the other, only in the meia-lua de compasso, and saying they are playing Angola. ... Actually, when I learned, the mestre used to say: capoeira is just one, you must hear the berimbau and play according to the toque. For each toque there is a specific way to play. There are not different styles; instead it is the toque that determines the differences in the game."

While many flips and kicks in breaking were inspired by gymnastics, street performance, martial arts, etc., it has become increasingly common for breakers to cite the influence of tricking.

Tricking has been described as a combination of martial arts, parkour, breaking, and gymnastics . Steve Terada recalls that in the mid-1990s, before the name "tricking" was widespread, "they would call them tricks. 'Cause there were only, I don't know, five foundational moves, really. 540 aerial, pop 720, maybe... And everything else was just considered martial arts" . Precursors to modern tricking (alternatively, early tricking) can also be seen in Xtreme Martial Arts competitions. Tricking experienced a significant rise in popularity in the 2000s, aided by websites like club540.com, bilang.com, and later youtube.com .