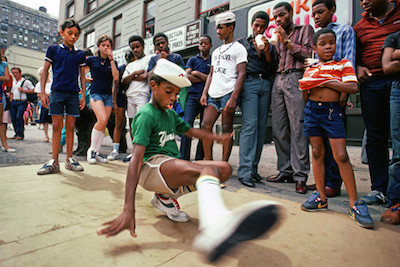 Footwork. Photograph by Martha Cooper in 1983 .

Footwork, or downrock, floor moves, floor rock, floor work, moves done close to the floor, often on the hands and feet. Footwork has been called the heart of the dance , and what separates breaking from other dance forms .

The definition of footwork has evolved over time. Writing in 1981, Sally Banes offered the first written account of footwork, "a rapid, circular scan of the floor by sneakered feet while the hands support the body's weight and the head and torso revolve slowly—a kind of syncopated pirouette" . In general, footwork includes moves done on the hands and feet after a drop, though some specifics are unclear, such as whether footwork encompasses knee rock, back rock, sitting threads, certain spins, slides, and power moves, etc. Focus summarizes, "there are many different approaches to Footwork to see and understand – it depends on the breakers' background. They might tell you different things on what's Footwork and what's not, and have a different definition of dope Footwork, but nevertheless a few basic things are universal. If the Footwork has great form, flow, originality and it's done on beat, then most likely we'll all agree that it's fresh" .

Breakers from the early-to-mid 1970s often refer to footwork as "floor moves" , while in Style Wars, filmed in 1981, the terms "footwork" and "downrock" are both used; Crazy Legs' short footwork combination is narrated, "he's doing the footwork, when original breaking came out," while Frosty Freeze later explains, "downrocking is, you know, trying to see who can compete against whose moves on the floor" . In a 2007 news article, Trac 2 described "floor rock" as "footwork like shuffles, kick-outs and intricate steps" .

There are identifiable trends in the history of foundational footwork, even with the great diversity of styles and individuality of each dancer.

Footwork evolved from drops in the early 1970s, as the extended break allowed for more time on the floor "to invent and experiment" . Michael Holman suggests that footwork came from breakers "using their arms and hands to support their bodies in order to free the feet and legs to do gymnastic steps, shuffles and sweeps" . The earliest footwork moves were developed by the Legendary Twins and Clark Kent . In Clark Kent's own words, before him, "they didn't have no floormoves! You see that's where we [Clark Kent and the Legendary Twins] were known for changing the game" , although earlier, Dancin' Doug would "drop to the floor, spin" as part of his "motorcycle" routine . Footwork was comprised mainly of signature moves at this time, such as the Twins' spinning move or JC's "windmill" . Only in the mid-to-late 1970s would footwork's foundational moves emerge, primarily due to the efforts of six crews. Among these was the Crazy Commandos, credited with developing the six step, sometimes considered the most fundamental move in breaking . In the 1980s, footwork's foundation was cemented and later built upon by crews such as the Rock Steady Crew, the Dynamic Rockers, and the New York City Breakers.

Footwork continued to advance in the late 1980s and early 1990s in Europe, especially in France, Germany, Italy, England, and Scandinavia . French breakers, especially Paris City Breakers and Aktuel Force, pioneered a fluid, sweep-based style of footwork . Battle Squad developed a diverse array of novel footwork moves, often stemming from concepts—some of which are explained by Storm in Storm's Footwork Fundamentals . In the footwork of Scandinavian breakers like Mad Nico or Freeze, one can see an emphasis on originality, direction changes, level changes, lateral movement, and slides.

Threads and wraps were introduced into footwork beginning in the 1980s, but evolved rapidly in the 1990s, particularly in Toronto and California, influenced by a combination of Mr. Wiggles' footwork, Europeans' footwork, and the "leg hop" thread .

Footwork is often unnamed, or is given different names at different times and places. For example, Karate Manny recalls, "we didn't really name our moves, so for example my side to side footwork... People call it the “CC Rock”" . Similarly, Orko recounts, "there was no names. Even when you did footwork, I know in my neighborhood, in the early days, they used to call it, "can you do the Crazy Legs" you know? There wasn't... there was no names for it! It wasn't even called the six step" .

The following is an incomplete list of foundational footwork: