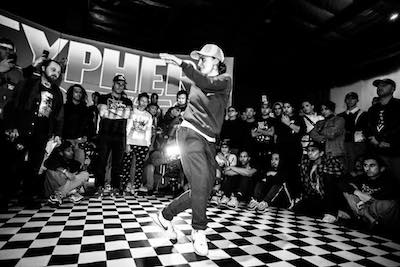 Top rock, or toprock, tops, rocking on top, uprock, dancing while standing, preceding a drop. In Crazy Legs' words, "top rock is the intro to breaking" .

Top rock refers to the part of breaking done standing. In Ken Swift's view, "if you use the word toprock, and you don't go down to the floor, it's not toprock—that's top style, or rocking, or freestyle, which are dances that existed already" .

Some breakers from the 1970s and early 1980s refer to top rock as "uprock," including Trac 2 and Spy , though uprock now refers almost exclusively to a separate dance. Kusa does not recall the names top rock or uprock, referring to top rock as "freestyle" .

In the early to mid-1970s, breaking was danced predominantly standing, or "on top" . Popmaster Fabel writes, "some of the earliest dancing by b-boy pioneers was done upright, a form that became known as 'top rockin'' [...] Top rockin' seems to have developed gradually and unintentionally, leaving space for growth and new additions, until it evolved into a codified form" . Inspirations included James Brown, tap dance, and contemporaneous local dances , as well as the music . Pantomimic routines were also common . Mike G notes that his top rock during the mid-1970s involved steps straight forward and back, in contrast with the more lateral movements seen later in the Rock Steady Crew's top rock .

"There was all types of different styles! Everybody would have their own style of top rock dancing [...] crossing the leg and then going back... everybody did that but everybody also had other moves that they would add to that."

Wizard Wiz also provides evidence that breakers had individual top rock steps . Focus writes, "when more Puerto Ricans got involved with breaking, they added more vocabulary on top with their Latin influence and dance heritage" . By the late 1970s, a variety of steps had developed, including the Indian step, Charlie rock, Latin rock, and outlaw .

As breaking evolved and emphasis shifted to floor moves, top rock simplified and became shorter. According to Ken Swift, "only maybe 10% I'll say, was what you did on top. It was very quick on top. Top rock was just something you had to do" . Similarly, Alien Ness recalls that in the 1980s, for him, "a top rock is a two step that never lasts more than three seconds before you go down" . While top rock may have remained part of the dance out of tradition, it also developed several functions, including to give time to connect to the music , and to clear or claim space on the floor before going down .

In the 1990s, the influence of house, hip hop dance, and other freestyle dances could be seen in many dancers' top rock . In the 2000s and 2010s, Mr. Wigglez' and Ynot's Top Rock City would be highly influential. Juste Deboute also featured top rock competitions around this time.

Like the rest of breaking, top rock is driven by the music . Top rock includes not only leg movement, but movement of the hands, arms, and the rest of body . Steps, kicks, spins, and poses are common components of "basic foundational top rock" . Alien Ness opines that every part of top rock, "should at least come with the b-boy approach. The bboy energy. The bboy attitude" .

The following is an incomplete list of foundational top rock steps: